Rab is the ninth largest Croatian island, situated in the Kvarner archipelago, which also include Krk, Pag, Cres, Lošinj and other smaller otrovy and peninsulas. The archipelago stretches from the north of the Kvarner bay near the town of Rijeka to the city of Zadar in the south, which begins Pag. Organizationally includes WC Rab to Rijeka County, which is the center of the city of Rijeka. 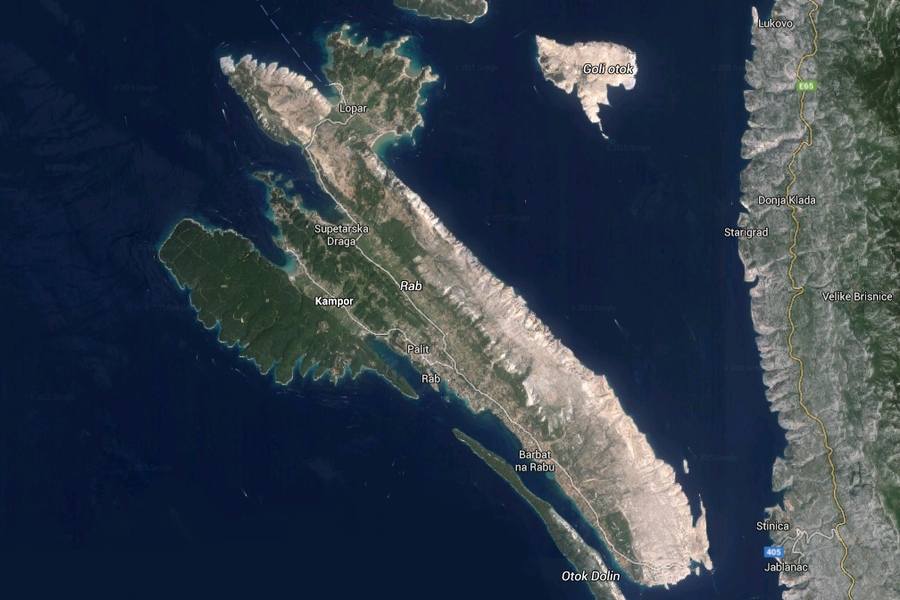 The island has a length of 20 km wide is 3-5 km. Its area is 90 square kilometers and it occupies about 10,000 permanent residents. In the high season, this number much higher due to tourists. Almost all the inhabitants are Croats.

Towards the west lies the island of Krk, Pag to the southeast and west of Cres. The & nbsp; around Rab there are several smaller islands, which are often targeted cruises. Its northeast coast is lined mountain with the highest peak - Kamenjak (408 m). The island is mountainous, mostly limestone karsts, with more than 300 spring water. 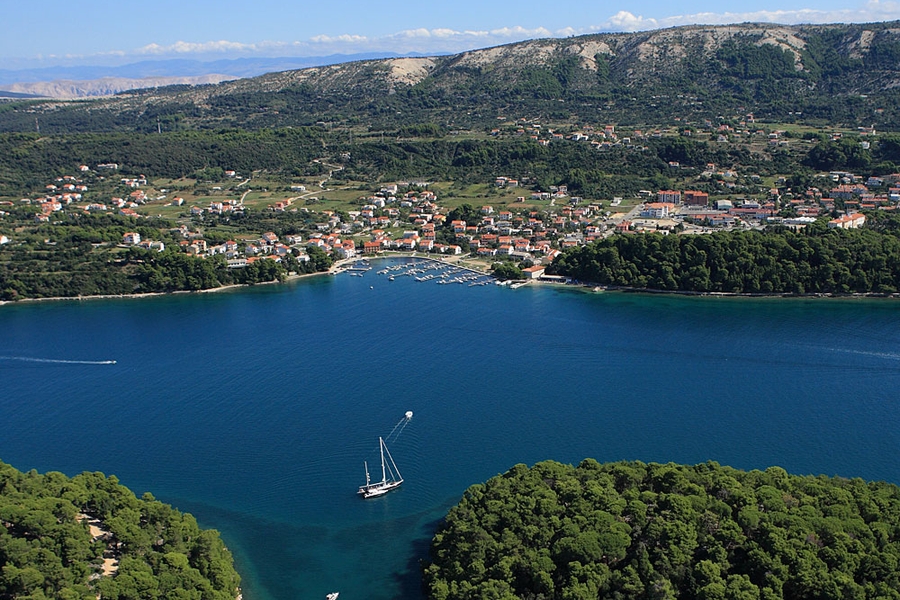 The designation "island of sun" Rab got through high hours of sunshine and the mild, pleasant Mediterranean climate. Against the cold wind from the north is protected by the hill Kamenjak. From the mainland is seen as part of the hill desolate, inhospitable rocks that cover a second, much larger, green part of the island. Rab is one of the most forested islands of the Croatian Adriatic. Dominated by pine and oak forests, and it makes him, along with vapors of seawater climatic spa.

A major attraction of the island, the beaches are perhaps of all kinds - from the typical Croatian rock through swimming off the pier, then pebbly, sandy small to large sandy beaches of the Greek type or Italian type. 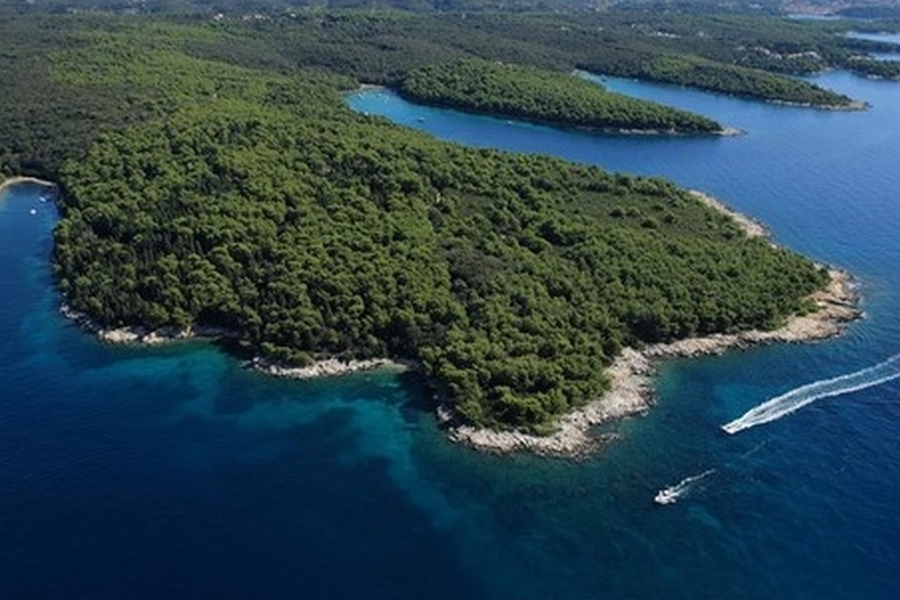 Rocky coastline can be found mainly in Suha Punta, where the hotel complex with woods next to the sea and in some places with concrete surfaces between rocks, somewhere even with slides into the water. There are also several small sand beaches. 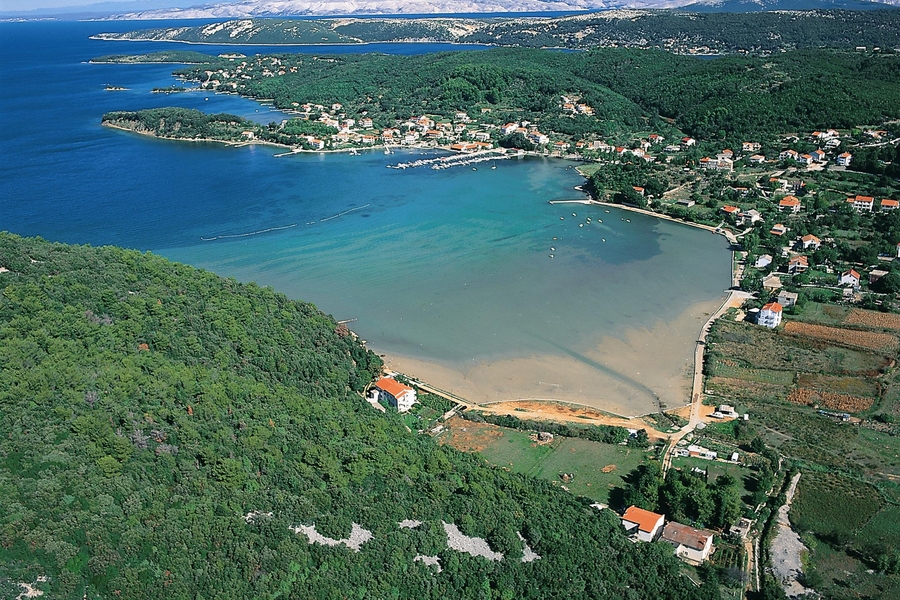 Sunbathing on the pier is possible in almost every resort. In some (for example, Kampor, Gonar or) is on the sea sand and the sea is very shallow.

Pebble beach located in the town Barbat, Banjol, in the capital and suburbs Palit. It is a small pebbles that are comfortable for walking.

In general, tourists are the most popular sandy beaches. Croatia is this kind of poor and pretty beaches on the coast can be found here and there a small sandy beaches, but mostly it is far from the accommodation. Rab is several sandy beaches. 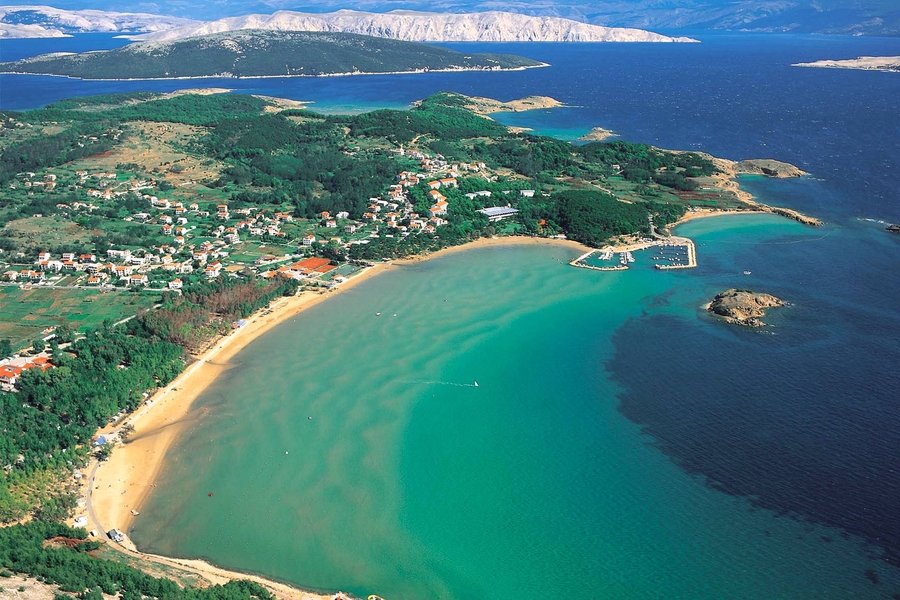 The biggest is "Paradise beach" in Lopar at the camp and hotel complex. The beach is several kilometers long and is quite wide and additionally surrounds the bay with shallow water, making it very suitable for families with children. For children completely Malice is perfect large sandy beach in the resort Kampor - water is the 100 meters or not the knees. Kampor are also several small sand beaches a large bay with a sandy bottom and shallow water. Medium-sized sandy beach is in Lopar - at the opposite end of the resort as the Paradise Beach. In Lopare there are also some wonderful sand beaches, but are not be reached on foot - but it does not take more than 30 minutes. 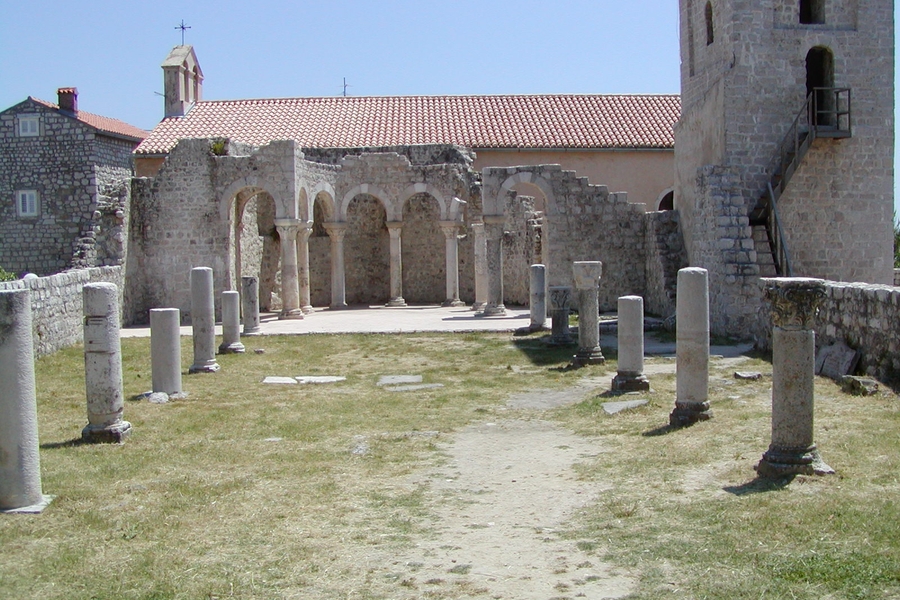 Rab Island residents had already Paleolithic - Old Stone Age. On the site of the present town Lopar settlement was established, which lasted without interruptions throughout the Neolithic Age (Neolithic), copper and Bronze Age until the 4th century BC, when its foundations has grown Ancient Greek military fortress (remains visible even today) . In 360 BC, Rab was inhabited by Illyrian Liburnian tribes who named it Arba (dark), under the then vast forests of black pine. In the 2nd century BC the Romans began to colonize the island, who here began to build summer houses, baths, temples and theater, for its pleasant climate and attractive scenery, therefore the town of Rab given them the epithet Felix Arba (Happy Rab). The city is mentioned for 10 years before Christ, a ancient Roman document which it then Roman emperor Octavian Augustus declares Municipio and gives him independence. 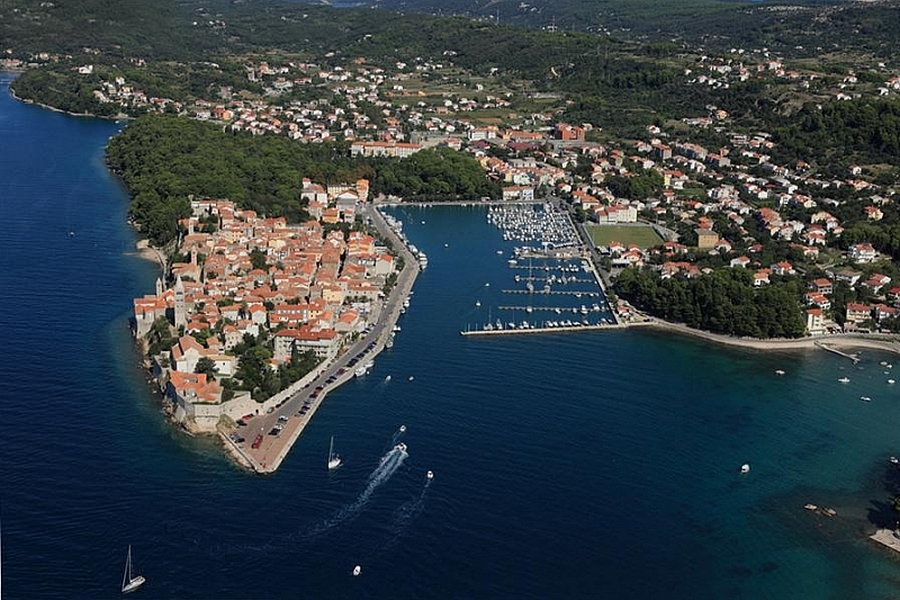 Since the first century the whole territory of Dalmatia became part of the Roman Empire as the province of Dalmatia, whose domination lasted until the collapse of the 6th century, when the territory fell first of the Western, and later to the Eastern Empire (Byzantium). Byzantine influence was small, since the beginning of the 7th century began to penetrate the tribe Dalmatia southern Slavs.

Rab with Pogamut among the first on the Adriatic islands populated by Croats. In the 9th-10th century there gradually ruled the Croatian princes and later kings - Tomislav (910-930) and Stepan Držislav (969-997), which could be crowned king of Dalmatia and Croatia. He was also recognized by the Byzantine emperor from whom received the royal insignia. At the end of the 10th century Rab fell to Venice and from the beginning of 11th-12th century it became a part of the Croatian kingdom. 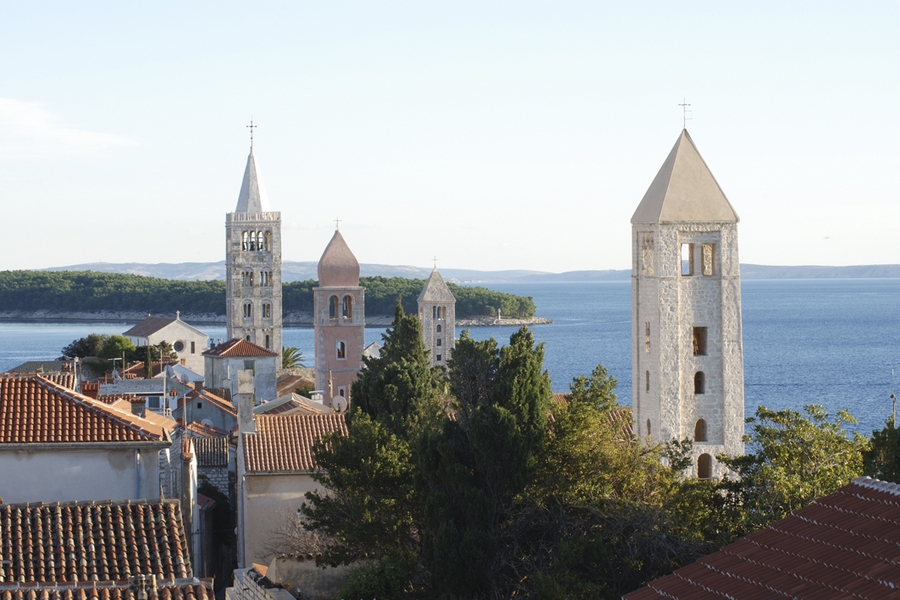 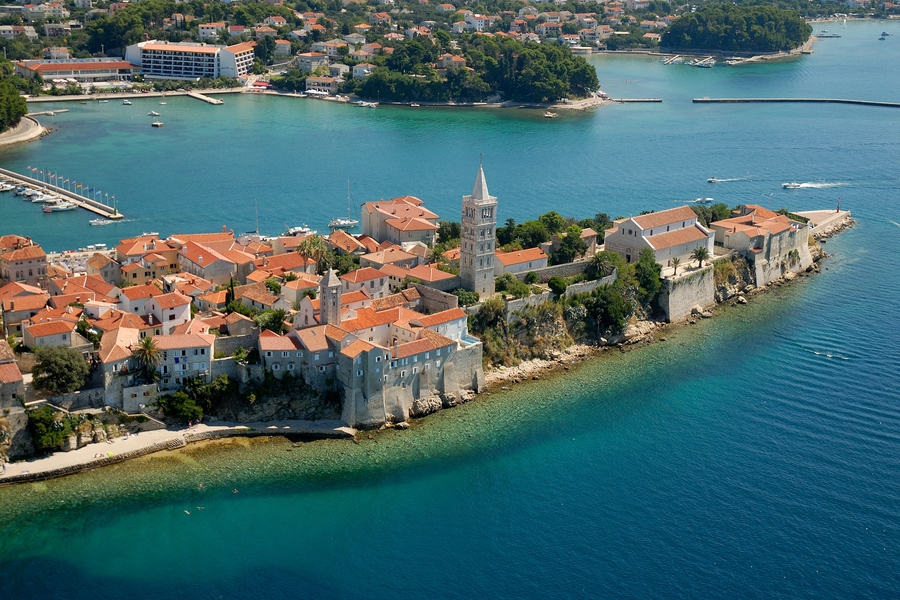 Venice remained under the influence of Dalmatia, including the island of Rab, until the dissolution of the Venetian Republic in 1797. After the Napoleonic Wars (1808-1813) was Rab in 1815, along with the neighboring islands and the Dalmatian coast is connected to Habsburg Austria.

After the first World War Dalmatia becomes part of the Kingdom of Serbs, Croats and Slovenes. After the second world war belongs to Yugoslavia and from its demise in. 1991 is part of the Republic of Croatia.

Original villages were gradually transformed into a quieter or busier seaside resort. 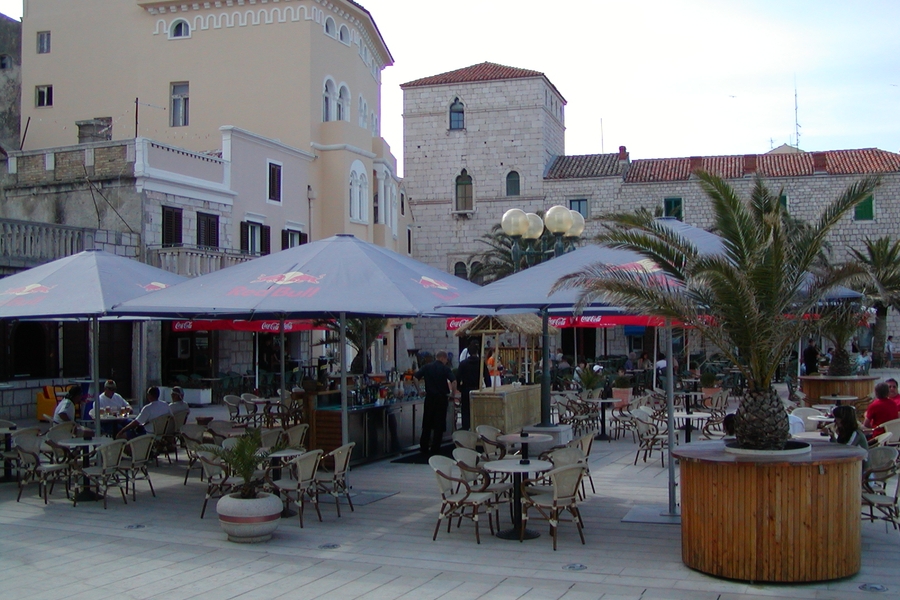 "Capital" of the island is the homonymous city of Rab, whose old part is situated on an elevated peninsula, under which the port is situated. It is a typical Mediterranean town with narrow streets and stone houses, where it can feel the romantic atmosphere. Aisles are full of cafes, restaurants and shops. You will find the stone squares, churches, prospects and all that lives up to late evening. 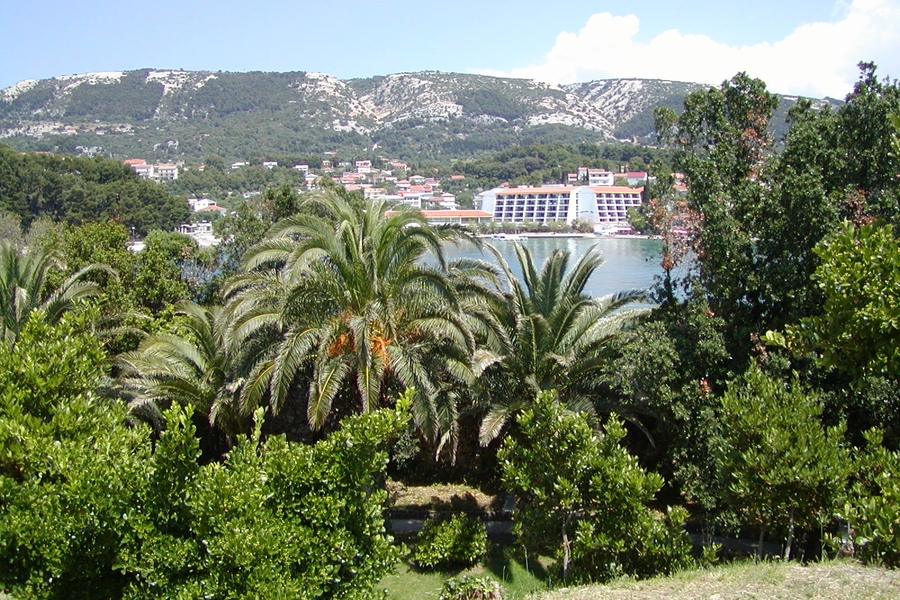 Under the old town is the port where many smaller or bigger cruise ships and their owners present their tourist attractions. On the other side of the port is a newer part of town with villas and shops. Here you can do shopping in a supermarket as we are used to at home, choose from an ATM money or replace them in the bank. In the city Palit, which is actually a suburb of Rab, is the amount of apartment buildings, where it is possible to stay and be at sea, but on the reach of the "center."